Perfect Assassin is a bad sci-fi action/adventure hybrid that is nowhere near as good as the classics in the genre, but nonetheless deserves much more attention than it got in the gaming press. As the title suggests, you play the most renowned and lethal killer in the universe - a cyborg part man, part machine who is caught up in a plot that encompasses many hidden twists and action sequences.

Like most 'traditional' point-and-click titles, Perfect Assassin is played from the third person perspective. But unlike a typical p&c game, action plays a constant role: you can whip out your trusty gun at any point in the game to switch to "combat mode" in order to shoot menacing things on screen - much like Alone in the Dark series - and you will have plenty of reasons to do so during the adventure. However, it is much less action-intensive than Ecstatica or Omikron: despite some (mostly easy but still annoying and random) action sequences, much of the game involves standard adventure-style puzzle solving and talking to NPCs. One of the game's highlights is the conversation system, which lets you set the 'tone' of your character (aggressive, etc.) similar to Return to Zork. You also can access the Kar-Net information system almost at any time during the game, and doing so is crucial for background research. Most puzzles are standard inventory-based fare, although a few of them are quite creative. Despite a twisting and turning plot that involves everything from time-travel through different dimensions and armed combat, to the imminent destruction of the universe, a lot of pointless random combat and inane puzzles make Perfect Assassin a horrendous game that all adventure fans should do best to avoid. 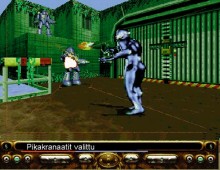 People who downloaded this game have also downloaded:
Immortal, The, Unshadowed, Snatcher, Last Ninja 2: Back with a Vengeance, Largo Winch: Empire under Threat