Yucata' by independent developer Tobias Schilgen is an excellent Windows version of the German board game of the same name published by Hans im Gluck in Germany, which is in turn based on the ancient Mayan game, pieces of which were discovered in the Mayan ruins of Palenque, Mexico in 1995. Last played around 1300 A.D., Yucata' is a stylish board game that represents the perennial good vs. evil fight (archeologists surmise that it was played solely by Mayan priests as part of religious rituals).

Yucata' is a game for 1-4 players, any of whom can be computer or human. The spaces on the board in this computer version exactly match the ground plan of Palenque archaeological site. The object is to collect pale stones (blessed by good spirits), while avoiding dark stones (possessed by evil spirits). Each player holds a hand of 7 cards (1-5, and two special move cards). On the play of a card, they must advance their stone around a track as many spaces as the number played, and collect any good or bad stones they pass or finish on. Timing is everything, as you want the good stones, while avoiding the bad. This is reminiscent to the African game of Mancala, but more sophisticated due to the good/bad dichotomy of stones.

Overall, Yucata' is an outstanding rendition of the intriguing and unique ancient game. In addition to capable AI, the game boasts outstanding graphics, sound effects, and music that actually sets the mood. The game also includes well-written rules of the board game both in Windows on-line help format, and a separate manual. If you enjoy contemplative mind games in a unique setting, Yucata' is one of the best freeware games you'll ever play. 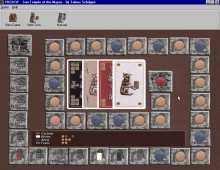