Zendo-San is an excellent, albeit limited, freeware PC version of Zendo, a fun but highly underrated game of inductive logic invented by Kory Heath, using pyramid-shaped pieces called "Icehouse" that he also invented (incidentally, the fun Icebreaker game on this site also uses Icehouse pieces). With names borrowed from Zen concepts, Zendo is best described as a more challenging version of Mastermind: up to three human players - called "Students" in this game - take turn to guess a rule that the computer-controlled "Master" used to build an arrangement of Icehouse pieces - each arrangement is called a "koan." The first Student to correctly guess the rule wins. You need to use inductive logic to uncover the secret rule the Master uses to separate pyramids into those with "Buddha Nature" and those without. This makes the game more challenging than Mastermind because you are not simply guessing a specific pattern of pieces, but the rule that govern their arrangements. For example, "a koan has a Buddha Nature if it contains an even number of pieces" and "a koan has a Buddha Nature if and only if it contains both an odd number of pieces and an even number of colors" are both valid rules. After each guess, the master (computer player) marks one koan with a white stone and the other with a black. The white stone indicates that the given koan has a "Buddha Nature," while the black stone indicates that the koan does not have a Buddha Nature. Once the two initial koans are set up and marked by the Master, the Students take turns building koans of their own. After a Student builds a koan, he/she must declare either "Master" or "Mondo." If "Master" is called, the Master marks the koan with either a black or a white stone, to indicate whether it has a Buddha Nature. When a player calls "Mondo," all of the players secretly place a black or a white stone in their hand, predicting whether the koan will have a Buddha Nature. They are all revealed, and each player who was right is rewarded by the Master with a green guessing stone. On a Student's turn, he/she may then turn in a guessing stone to try to guess the rule. If that Student is right, he/she wins the game. If there is a clear counterexample to her rule on the table among the previously built koans, the Master returns the guessing stone, and the Student may make another guess. There is no penalty for guessing a rule which can be disproven with the existing koans. If her rule explains all of the koans on the table, but is nonetheless not correct, the Master takes the green guessing stone and must build a counterexample: either a koan which has a Buddha nature, but would not under the guessed rule, or vice versa. Then the Student can guess again, assuming she has any guessing stones left, or can pass and let the next Student build a koan. It is hard to describe and is more confusing than it actually is :)

Zendo-San is a great PC version that lets you play this fun game without other players, or with friends who don't want to be Master (understandable, since devising a complex rule is nearly as difficult as inducing it). Like the real thing, each game starts with the computer, as Master, selecting a rule and generating two initial patterns (koans). One pattern obeys the rule and the other doesn't. One to three human players take turns submitting koans to the Master or to the group (Mondo). The program will conduct the Mondo, mark the new koan, and award guessing stones. When the game ends, the Master's rule is revealed. Instead of pyramids, this program uses flat, barely more than two-dimensional pieces. Because the PC version is constrained by a severely limited vocabulary for expressing rules about Buddha Nature, so much of Zendo's richness is lost, although it still gives a good idea about how great the game is - and hopefully gives you enough incentive to buy the real thing :) Unfortunately, it IS possible for the program to goof - i.e. some koans will be bad, or the Master will erroneously declare a win. But this does not happen very often, so by and large you can still enjoy the game. Overall, if you like Mastermind or similar logic games, Zendo-San is well worth your time. Be sure to check out the original board game as well, which is naturally much more replayable and 'open' than this PC game. Recommended! 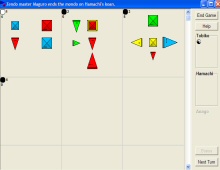