Wari is a neat little freeware version of a popular African board game, more commonly known as Awale, Wari, and other similar-sounding names. Awale is a 2-player game played with a board that consists of two rows of 6 pits called "houses" (12 total), with two larger pits (kalahas), usually on either end. Initially, each player owns 6 houses, and each house contains 4 seeds. You pick up the beads from a house of your choosing (it must be one of yours) and sow them one by one anti-clockwise around the board, and examine the house where the last bead falls. If the last house does not have 2 or 3, no action is taken and it is the other player's turn. If the last house belongs to your opponent and the number of beads is 2 or 3, you collect those beads. If all your opponent's houses are empty, you must make a move which will give him stones. If no such move can be made, you capture all the remaining stones on the board. The game is over when one player has taken a total of 25 or more stones, both players have taken 24 stones each (tie), or if the computer determines that the game is a stalemate, in which case each player takes the stones on his side of the board.

This freeware version by Eric Roosendaal features a very strong computer AI - I was never able to beat it on any level higher than "Skilled," and there are 9 difficulty levels in all. This alone would make the game well worth a look for all board game fans, but Wari has many bonuses. There is a nifty "analysis mode" that will analyze the current game for you, the ability to save and restore, complete take back and replay of entire games, and a well-written on-line help file that includes strategy and tips in addition to complete rules. All in all, a very well-coded and challenging game that brings the fun of Wari to life. Highly recommended to anyone who is interested in abstract games. 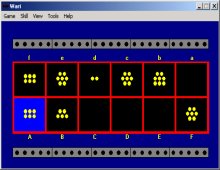