Viking Siege is a great DOS version of hnefa-tafl (literally "King's table"), a great Scandinavian board game that was immensely popular across northern Europe in the dark ages. The game is similar to chess in that planning and tactical considerations are required, although the rules are simpler. The most interesting thing about hnefa-tafl is the dramatic premise that is inspired by actual Scandinavian warfare (similar to how Chinese chess utilizes real terrain features such as a river): a Viking band with their leader is besieged by a larger opposing force. The band's goal is to help their 'king' escape to the periphery of the field, while the besiegers try to surround him and bring him down. Hence, unlike chess, the two sides have different objectives, which give the game a unique tension.

All pieces in hnefa-tafl move like the a rook in chess: straight vertical or horizontal lines. Only the King can occupy the center square, although others may pass through it. A piece is captured and removed when it is surrounded by two opposing men on opposite adjacent squares. The besieged King's side wins if the King reaches any one of the corner squares (i.e. successfully escape the opposing army). The opposing side wins if it captures the King by surrounding him on four sides, or on three sides against the edge which renders him unable to move. Viking Siege is a faithful PC version of this board game classic, with a lot of options including different difficulty levels (in the form of different Nordic gods you can play against), complete rules, on-line hints, and an excellent tutorial. You can also play against another human player if you wish, although no Internet play is supported. If you enjoy chess and other challenging abstract board games, this rendition of hnefa-tafl is one you'll keep coming back for more. 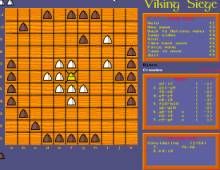