Take It Easy is a solid PC version of a little-known board game of the same name that is published by FX Schmid in Germany. In the game, up to four players (any one of which can be computer-controlled) take turns placing hexagonal tiles on the board to compete for the highest score. Each tile has three numbers and three colored stripes printed on it. Each stripe goes across the tile in one of the three possible directions (N-S, NE-SW, or NW-SE), and its color and shape corresponds to its number (1 to 9). Each number only goes in one direction: 1, 5, and 9 go vertically, 3, 4, and 8 go southeast, and 2, 6, and 7 go southwest. Each set of 27 tiles has one tile for each possible combination.

To start a round, one player turns all of his tiles face down and mixes them up. All the other players turn their tiles face up. The player whose tiles are face-down then draws one at random and reads its three numbers out to the other players. Everyone then takes the same tile and places it somewhere on their board. This drawing/placing tile continues until all the boards are full. All tiles have to be placed right side up, and once a tile is placed it may not be moved or covered over.

After the boards are full, it's time to calculate the scores. Every time you have an unbroken line of the same color/number from one side of your board to the other, you score for every tile in the line. So an unbroken line of five sevens will score thirty-five points. But if there is any tile in the line that is a different color (number), that line scores zero. Add up your scores in all three directions, and that gives your total score. The highest score after four rounds is the winner.

Like its board game original, Take It Easy is a quick and fun abstract strategy game with some luck involved, although it is impossible to figure out exactly the best place to put a piece by calculating the optimal payoffs based on probabilities (if you can do this kind of thing in your head). It requires more thought than Dominoes, but won't drain your brain cells as much as chess. The download here is in English, but you can download the German version as well as a comprehensive manual in both languages from the official site. If you enjoy abstract board games, especially mathematical ones, you'll probably enjoy this old game. 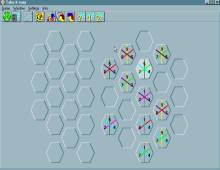