Wizard's Quest is an excellent Windows version of an oldie Avalon Hill board game, first released in 1979. Unlike Avalon Hill's classics like Advanced Civilization, Wizard's Quest is a much simpler and easier game - designed more to introduce young gamers to the world of board gaming than to offer a lengthy challenge to wargame veterans.

Although it is not difficult, Wizard's Quest does have some intricacies that make the game more interesting. There are six different types of creature represented by the playing counters: men, hero, sorcerer, orc, dragon and wizard. The hero, sorcerer, and men counters are directly controlled by the players, while the orcs, dragon, and wizard counters are controlled by the dice. Players have no influence over these counters except through special powers granted by a petition card or by successful battle. Anytime a player receives two or more men to place on the board for any reason, he/she may substitute either the hero or sorcerer for two men or he/she may substitute both for four men. For example, rather than place ten men on the board at start, a player may place either the hero or sorcerer and eight men, or the her and sorcerer and six men. This gives a nice strategic overlay to the game, and makes the starting deployment and locations much more important.

Up to 6 players can play in the computer version, any of which can be human or computer controlled. Each player has three treasures hidden across the board, and everyone has to fight the orcs and the other players to be the first to recover them all. The gameplay tends to come down to "all ganging up against the leader," but there is really nothing wrong with that, except perhaps it would disappoint anyone expecting a 'deep' board game. This Windows version is very well-coded, with a colorful board and easy to use interface. If you like Avalon Hill board game or tabletop war/strategy games in general, check out this fun and free old game. Recommended! 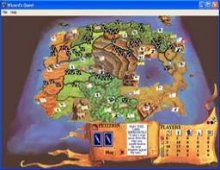