I've spent sleepless nights with this one back in 1994. All those quests...conquests...heroes... Ok, here's what it's all about - You will be given a city, a hero and a random army. Your goal - conquer all the others (maps with even 100 cities or more!) using hundreds of different units and heroes. What I always liked about this one were the special quests that could earn me magic items and other useful stuff. Who ever played this game knows how great it is.

Based a lot on the first game in the series Warlords 2 takes off where Warlords 1 left. It's still possible to play as 8 players and the races are also the same. A lot of new units are included as well as upgrades to the old ones. You still start the game the same way but in Warlords 2 there is now the option for almost unlimited gameplay as there are now several new scenarios included as well as the option to create random maps affected by own settings as you can decide how big a percentage that should include water, mountains etc. I really like this feature because if you want to play a scenario with a lot of sea battles or just want to use as many ships as possible you just turn up the percentage of water.

The AI has also been improved a lot and if you are looking for the ultimate challenge you should try and choose the hardest levels for all opponents. It will feel like almost playing against 7 very experienced Warlords 2 human players. Note that you can also disable opponents so if you wanted to you could play against only one other opponent. I personally think that is a bit boring since you might be placed at each side of the map and it will take a lot of time before you will meet each other. As mentioned the units have been upgraded but so has the graphics, interface (while it hasn't changed that much) and the overall speed of the game. All of them good improvements compared to the first game in the series.

A nice little detail is a guy that is featured both at the start of the game or if you are doing very well. His voice and the overall atmosphere when he appear is well done and a nice addition to the game compared to Warlords 1 that could be a bit dull once in a while. Another nice addition is that player created scenarios can be imported into the game so you could actually play the map from Warlords 1 or maps based on both Lord of the Rings and Dragonlance. If you search enough for it it's even possible to replace units with things from Star Wars if you wants to. Of course that could be a bit extreme. Finally you can save a map if you really like how it looks (only with random generated maps of course). Overall Warlords 2 is a worthy sequel offering a lot of new things but at the same type staying within the original game engine.

Warlords is a strategic war game, fought out by eight different players, for the domination of the Kingdom of Illuria. It can be played by one to eight people, with the computer taking the remaining positions. The Kingdom of Illuria, after some severe internal disputes, has seethed under a sullen and uneasy peace. This truce has now disappeared, along with the arch-mage who imposed it. The eight empires of Illuria realize that this is their chance for total domination, a very unstable situation. Forces are being mobilized for conquest, and only one Supreme Warlord will prevail.

Your objectives in Warlords are brutally simple: to eliminate all organized opposition to your rule. To do this, you will have to control all eighty cities in the lands of Illuria, and thereby eliminate all seven opponents. There are many ways to achieve this, and brute force is just one of them. you might ally with dragons or wizards, or have your Heroes search out and wield magical swords that will tip the battle in your favor. Clever military tactics and even economic warfare are possibilities too.

Warlords II brought more continents to the game along with many new features and better graphics. 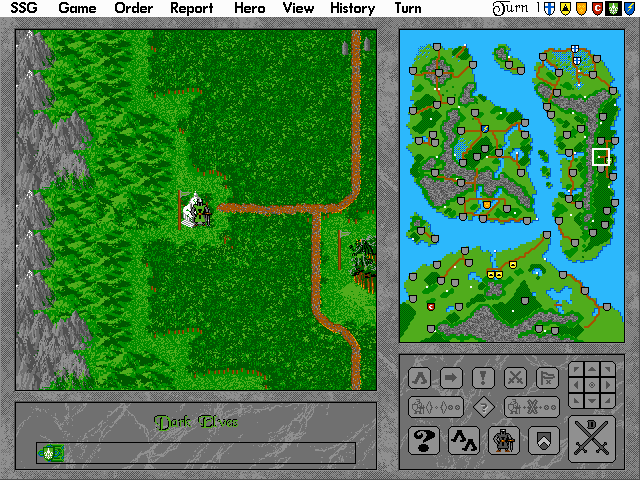