The prequel and a good warm up for a true masterpiece made 3 years later (I am talking about Warlords 2). Heroes, castles, quests and conquests, dungeons and dragons (and other monsters as well). A good strategy game for all middle-ages fans.

One of the best strategy games ever made for the Amiga. Later on SSG also made a PC version that received the same amount of attention and even today Warlords has the quality to compete with more modern turn-based games. The game is taking place in a fantasy world including Humans, Elves, Dwarfs, Demons, Dragons and many more units. There is only one land you can play the game in offering both areas with hills, mountains, forest, swamps and plain land. Because of these different territories the 8 different races you can play as are also placed at the same spot every time. That isn't a bad thing in my opinion though as it's logical (at least for me) that the Elves are placed in the forest, Hill Giants in the hills, Orcs in the swamps and Sea Elves at the sea.

Once you have decided on what race you want to start as (note this is not an actual race as it will only affect a little area where you start) you start the game with one city and a hero. A hero can as seen in many other games do special things such as seeking quests, gain experience and a few other good things. When he enters a ruin or temple 3 things can happen. He will get the opportunity to get blessed that will make him stronger, allies will join him (dragons, demons etc.) or he will encounter a foe and if he wins he will get either some gold or an item. The items can be very different and some of them can be very useful. Both items that increase your strength but also some that will increase your speed or make it possible to fly.

In your cities you can create different units, often based in what area they are located, and you can also upgrade the towers in each city as well as paying extra to be able to create new units in the city. Furthermore you can also destroy cities which is a good tactic if you know that you can't defend the city anyway and don't need it yourself. You can play up to 8 human players and but of course also less and then just let the computer control the rest. The game is over once one of the players have captured all cities in the game but if you are playing alone against 7 opponents control by the computer they may surrender before although you can reject their offer and the game will then continue. Overall a great strategy game and you won't be disappointed. 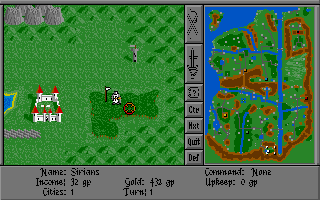