Warsong is an easy but fun turn-based strategy/RPG game - a popular genre on console systems that never took off on the PC (we see a lot of strategy and RPG games, but not often both genres in the same game). The game is the first and only game in Masaya/Treco's successful Langrisser series to be translated into English. In this highly underrated game, you play Garett, a prince whose father has just been dethroned by evil invaders. It turns out the empire who attacked you was looking for Warsong, a legendary sword that is rumored to give its wielder unmatched magical power. Your job is to enlist allies and recover the sword. As you do so, will learn more about the sword and its long history. The story is cliché and dry, but fortunately it's not the most important thing for a strategy game.

Gameplay-wise, Warsong is a lot of fun. Like most games in this genre, you have a variety of troops to choose from, each with its own strengths and weaknesses. The troops include both typical medieval units like Archers, Horsemen, Guardsmen, and Monks, as well as fantasy creatures such as the Mermaids (my most favorite :)). These troops must be assigned to generals, and you are limited to 8 generals per scenario. Each general also has his/her own strengths and weaknesses. Combined with terrain effects, Warsong gives you plenty of tactical decisions to make.

Like a typical RPG, units in the game gain experience from defeating enemy units. At every tenth level, a general can change into a more powerful class. You often have the choice of what class to change into - for example, a Fighter can become either a Knight (high attack power, lower defense), or a Lord (medium attack power and defense). Some choices are more dramatic, such as choosing between a magic user and a fighter. These choices keep the game interesting and fresh.

Like other good strategy/RPG hybrids, characters (i.e. generals) have unique personalities, and help move the story along by conversing with each other and enemy generals. Similar to some PC strategy games (e.g. Kohan), all troops have to be within a certain range of their squad leader (i.e. the general) in order to fight effectively, and only generals can cast spells. To make the game more challenging, there is no way to resurrect dead generals - troops can be replaced, but a slain general is gone forever from the game.

Scenario objectives are nicely varied, ranging from the typical "kill all enemies" kind, to more specific goals such as killing the enemy leader or escaping to the map edge. There are many surprises, and you will often get new or different objectives as the plot unfolds.

The only major gripe I have with the game is that, like most console strategy games, Warsong is quite easy. The AI is very predictable and not very smart. The computer player often makes stupid decisions, such as letting powerful generals stand by and watch their troops get annihilated. Fortunately, higher scenarios have tough "boss" enemies that are stronger than any of your individual general, requiring good teamwork to defeat.

If you have played similar games on the console such as Shining Force series, Warsong may seem like nothing new. However, Warsong deserves recognition as one of the first games of its kind on 16-bit systems. It's a lot of fun to play even to this day, despite outdated graphics and lack of challenge. If you like the game, also check out its Japanese-only sequels in the Langrisser series. 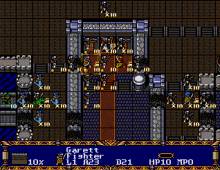