A nice classic from SSI. This is the third volume in the famous wargame series where you can build your own scenarios and play them. You can of course also play pre-made scenarios which are included.

The graphics are much better than in volume 1 and 2 and when the controls are really good and very simple this is a really good wargame if you like these kinds. All aspects of the game have been improved compared to the first two games in this series, but you may have noticed that the file size is huge as well. Some computers won't be able to run the game because of their graphics card. And please choose the minimum installation when you install the game.

"A detailed examination of tactical warfare from the Mexican War (1846) to the Russo-Japanese War (1905), this allowed the gamer to "dervishly" beat up on Fuzzy-Wuzzies to his heart's content. With a scenario editor that was relatively easy to use, a plethora of scenarios have become available over the Internet covering the obscure and not-so-obscure battles of the 19th Century. Remember, a repeating rifle generally beats a bow and arrow, unless one grows too ambitious ... My personal feeling is that the scenarios were in fact too generic, and I was never able to discern in game terms the basic advantage of the needle-gun in the Franco-Prussian War or why certain rifle advances occurred in certain times. But if the history was a little weak, the game value was pretty strong." 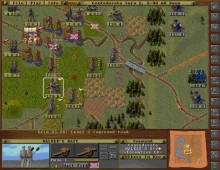