An interesting mix of a strategy and a role playing game, War in Middle Earth is quite a good game, closely following the story FROM the infamous J.R.R. Tolkien's book. You control various armies in a classic strategy style, while actual battles are done in an RPG fashion. A game that every serious role player should play just as well as all the Lord of the Rings fans!

One of the better games based on the famous trilogy by J.R.R. Tolkien. Still War in Middle Earth is lacking a lot of details and with somewhat poor controls and overview it's almost essential that you know the entire story to be able to play the game with just a fair chance of winning in the game. You start the game by controlling the Hobbits with Frodo as the leader. You eventually get the rest of the fellowship with you and can later decide to split up your party as they do in the books as well.

The game is a mix between the adventure, roleplay, action and strategy genres but once you get into the game and your party progress onto the way to Mordor the game is more and more a strategy game as you have to control all the good armies as well making it a very difficult game but exciting as well as there are many units on both the good and evil side. But you have to succeed at both things, as the game will end if your party is killed and there isn't much point in destroying the ring just to find out that all your soldiers are dead and Orcs are ruling the world with Sauron as the leader. The controls are quite hard when your party walks around. When you do that the game is divided up into several screens and this is very the game actually lives up a bit even when you consider the bad controls and poorly done gameplay as you can recognize several of the places you go to because the graphical details in the game.

War in Middle Earth is a good attempt of mixing an adventure together with a strategy game and it does succeed with several things but also fails terrible at some areas. But if you can live with the annoying controls, sloe gameplay and the lack of a good overview once your party is getting nearer it's target then you can use many hours on the game. And if you are a fan of the story you will probably easily ignore those things and instead enjoy the story in the game as well as the battles and somewhat good adventure parts. But don't expect too much from the actual title, as I was a bit disappointed when I first played this game.

Melbourne House jumped into the fray with its own ambitious strategy/RPG that puts you in control of a wide range of characters from Lord of the Rings, starting out as Frodo and his neighbors Sam and Pippin. Strategic elements include allocating armies (similar to Dune) and RPG-like combat, while the adventure portion follows the book quite closely. Overall, an entertaining and solid adventure, if you can put up with its interface quirks. 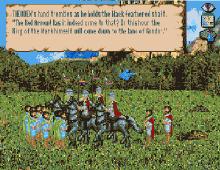