Now this is a masterpiece! As one of Atari's best games, Utopia puts you in charge of a space colony and it is up to you to defend it from the enemy attacks and in the same time - expand and give your citizens a high standard life. In other words - you have to create an Utopia!

This isometric-view game is pretty detailed. You will have to build various factories, hospitals, food processing plants, ore and gas mines for military use...

There is a lot of strategic planning as well. As you get attacked you will have to deploy your units and try to stop the attack. You can also attack enemy colonies by sending your tanks out on a missions. Various other random events could occur as well. Annoying meteor hits are always a trouble while mine collapse is easier to handle.

All in all, Utopia is a great game for its time. A lot of modern games are actual successors of this great title and you simply must play it!

Utopia is one of those solid, entertaining games that could have done a whole lot better if it had sparked the imagination of the public in some way. In Utopia, you play a colony administrator in charge of building a new settlement on a distant planet. While satisfying the citizens of your settlement is paramount, you must also spend time planning the defences of the settlement and investing in military research. Rather than a SimCity clone, Utopia is a mixture of SimCity, Dune 2000 and Civilization, taking strong points from each of these games and adjusting it to the Utopian style.

The city building part of the game is enjoyable but not ground-breaking. Developers Celestial Software paid close attention to the combat aspect of the game. You can simply defend your settlement or attack your enemies off screen, all the while building bigger and more destructive weapons. Devious administrators may also wish to choose espionage as a means of survival.

Graphically, the game is typically isometric - although this was probably ahead of its time for 1992 - although most everything else, including the sound, is average. Utopia is not the largest game you'll ever play or the most addictive, but it's enjoyable and unlike many games nowadays, maintains a degree of originality.

Utopia is a very unique game, which on first glance looks like nothing more than another Sim City-style game. However, there is a lot more to it than that: the city building portion is pretty good, and a wide range of buildings can be utilized. There is also a combat element to the game, but this is very disappointing because, unlike most games with a combat model such as this, the only time you really have direct control over your troops is when the enemy inade your land. When trying to assault the enemies yourself, however, the troops will just go out of screen and you will be presented with the results and number of survivors at the end.

However, the most redeeming feature of Utopia is the espionage method employed, which is rather simple but a very entertaining part of the game. You contribute money to the spy fund and get occasional reports back; the information you gain pieces together as the game progresses, the amount of money given to the spies will influence the verbosity of reports. At the maximum number of these reports, you end up with a very well-written and entertaining story.

I wouldn't rate this game as anything other than mildly entertaining, replayable enough to keep you intrested, even if the main reason for re-playing it is to learn about the other alien cultures ;) 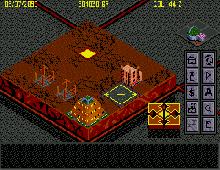