Licensed by and designed with the United States Chess Foundation, USCF Chess from Indigo Moon/Interplay is the only official chess program sanctioned by the U.S.C.F. and the only chess product to give users an official U.S.C.F. National Rating. Despite boasting one of the most advanced artificial chess intelligence ever created for home PC, the game falls a little bit short of expectations due to "dry" presentation and lack of savvy that fans of Chessmaster series are familiar with.

To be sure, one would be hard pressed to find fault with the game. Included is a complete library of over 300,000 opening moves and recommended strategies. There is a thorough and comprehensive strategy tutorial to help beginners, and intermediate players can hone their skills by replaying or reliving some of the most memorable chess matches in history by studying past games in the huge library of Grand Master Tournaments. Advanced chess masters can opt for the ultimate challenge of timed play against the highest-level computer player, or play against a friend via modem or null-modem connection. There is a large variety of 2D and 3D boards, and the game is played via an elegant, clean interface.

What makes USCF Chess stand out from other chess programs (that is, until Sierra's highly underrated Power Chess) is the dynamic "mentor" feature. The mentor guides you step by step through the game, giving you comments on the moves at each stage. This feature, combined with the excellent strategy tutorial, give beginners all the tools they need to learn the intricacies of the game. Another nice touch is the built-in support of the standard PGN (Portable Game Notation) format for chess data files. This allows you to download game information files off the Internet, and replay recent tournament games on your computer.

The last but not least unique feature is the ability to get an official U.S.C.F. ranking. As you play the game, the computer measures your skill and will print a certificate with your ranking, which is accepted in national tournaments hosted by the U.S.C.F.

Overall, USCF Chess is a great game for both beginning and advanced players. Its mentor and in-depth tutorials will teach new players the basics, and experts will find the computer a challenging opponent. With the ability to play across a network or the Internet, you have one well-rounded chess program that does its job admirably well, even if it may not look as attractive as the better-known Chessmaster series. 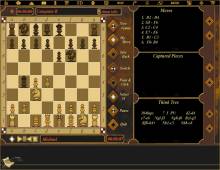