What can I say? Not my type of game simply because you start the game with no clue of what to do. I did find out that Universe 2 is a very detailed game where you have to explore and trade in an unknown universe with your spaceship like seen in the first game in the series as well.

There are several different spaceships you can view detailed specifications on as well as a drawing of how it looks like (because of the age of the game this isn't very well looking). While fanatics of this game might find it great that so many details are included it will without doubt scare away the average game fan which is a bit sad since Universe does beat similar games in this genre regarding offering details and options regarding the building of the spaceship and specification for each ship as well. Compared to Universe 1 the interface has been improved a bit but is still not very good.

I would not recommend Universe 2 to many people since it's simply too hard to learn playing and when both the controls and graphics aren't good either it's very hard to get started. But for the space exploration game fan with a lot of patience Universe might be worthwhile to check out. Still I can't understand why Omnitrend didn't learn more from Universe 1 to make this sequel much better.

M. Evan Brooks' review says it all about Universe 1: "A detailed simulation of space exploration and trading. Multi-faceted and very deep, its playability suffered from documentation which was hard to interpret as well as an unforgiving game system. Build your own ship to specifications, but a wrong move can waste hours of previous play. Still it was one of the early classics. " Unfortunately for armchair commanders, Universe 2 and 3 became more similar to RPGs with strategy playing only a minor role, but still great games nonetheless. 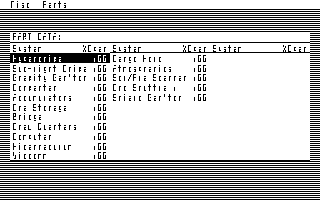