A superior sequel to Rainbird's Ultimate Military Simulator (UMS), UMS II: Nations at War features improved campaign mode, and much more control over units. Veteran wargamer M. Evan Brooks defends the game against critics in his synopsis: "this simulation was more detailed. If at first you don't succeed, fail, fail again. Coverage ranged from the campaigns of Alexander the Great to World War II's D-Day. Often rated by magazines as one of the worst wargames ever designed; this was probably uncharitable. Yes, the computer was horrendously slow, and yes, it did make less than marginal decisions, the fact remains that it did not destroy one's hard drive and had some interesting design concepts." Definitely worth a look from hard-core wargamers, although noone should expect it to be another Empire. 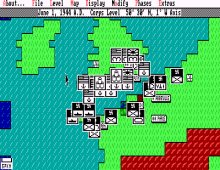