A poor man's Empire, UMS is a very ambitious abstract wargame that attracts a minor following among hardcore wargamers, but fails in the bigger market. M. Evan Brooks sums it up in his synopsis: "A visual feast, but a playable desert, UMS was incorrect on two counts -- it was neither universal nor a simulator. It lacked a naval option, and the user interface was quite clumsy. The initial disk included the Battles of Arbela, Hastings, Marston Moor, and Waterloo (the last of which omitted the Prussians entirely)."

Despite his (and most other critics') harsh words, UMS does deserve recognition for a few innovations, its ambition notwithstanding. First, it was one of the first wargames that offer intriguing isometric wireframe view of the battlefield. Sure, it's nearly useless due to the clutter of unit banners that are almost impossible to separate, but at least it hints at a great potential if it works (the system was actually revamped and used to much greater effect in War College years later). The game also contains a versatile map and scenario builder that is easy to use, with full controls over terrain features and unit placement. Overall, UMS may not top any wargamer's must-play list, but it is an ambitious, broad tactical wargame that is worth a look. 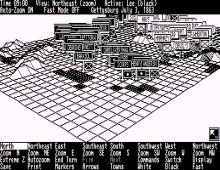