Ultimate Cards is a decent card game from Magicode/Micro League that offers the usual array of multiplayer card games, including Spades, Hearts, Gin Rummy, Oh Hell!, Whilst, and Crazy 8's. The game offers a good range of computer players, from beginners to experts, as well as other standard options such as hint, game rules, and score keeping. The game's AI is quite good, and I especially like the fact that my computer partner's intelligence (in games like Whilst) actually does make a difference in the game. However, lackluster graphics and lack of "frills" offered by other commercial packages (most particularly Sierra's Hoyle series) means that Ultimate Cards won't be the first card game you would think of playing. It's a shame, but if you don't care much about production values, give this game a look. At least it has Whilst and Oh Hell!, a couple of fun card games that not many other card games offer. 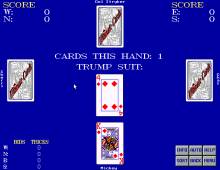