TV Mogul (known as Prime Time in the US) is a decent business simulation that lets you manage and run a TV station. Despite attempts to inject realism, however, the game suffers from flawed business model (e.g. many times your ratings would seem to drop for no apparent reason) that was worsened by many random elements. Perhaps the designer did this intentionally to increase the difficulty level, as the AI is none too bright, but this flawed engine definitely came across as superficial and illogical. The bottom line: only play this average old game if you are really bored with everything else. Anyone interested in the subject matter would do well to pass this by and pick up Mad TV 1 and Hollywood Mogul instead. A disappointing game to say the least. 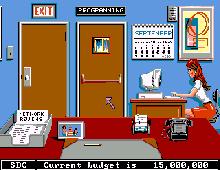 People who downloaded this game have also downloaded:
Syndicate Wars, Settlers II Gold Edition, The, To Serve and To Protect, Syndicate, President Election