Transarctica is a very unique game which is a mix of an adventure and strategy game. When you first start the game it looks like any other graphic adventure game but after a short look on your options you will see that you can do much more than just regular puzzle solving as adventure games usually offers.

You are in charge of a huge steam engine where you have to build several different units in a world that is the Earth in the future covered in snow without any sun at all. Doesn't sound like very friendly place and that is correct as well since the Earth is back to more primitive wars and trading in order to survive. As mention trading is involved as well like trading slaves with other towns. All of this is taking place in real-time which just helps to making the game harder.

The graphics are good and detailed and I especially like some of the screens displayed when you are inside towns. The game interface is quite confusing and at first it's very hard to get a good overview of what things you can do and where you should go in order to do them. An interesting and different strategy games with several adventure aspects included. Worth a try.

A unique strategy / adventure game set in a hypothesized future where Earth has lost is Sun and all is plunged in snow, Transarctica puts you in command of a 1,000-ton leviathan steam engine that houses thousands of nomads. You must build different types of train compartments, outwit the war-trains of the evil Viking Union, trade with towns for slaves, mammoths, etc... all in real-time. Overall, one of the best Silmarils games ever made, despite cumbersome interface and extreme scarcity of resources. 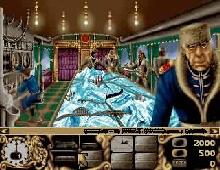