Arguably the best game ever made for SEGA CD console, Third World War is an excellent game of global politics and economics. The game suffers from the same syndrome that plagues the likes of Dark Wizard and Herzog Zwei: a great game released on the wrong system for its genre. Had developer Extreme released the game for PC, the system that most die-hard strategy fans and wargamers use, Third World War would no doubt have sold much better than it did for a console that offered mostly action/arcade games - and a short-lived one besides.

As the name suggests, Third World War is a "hypothetical/what if" wargame set sometime in the late 20th century, when conflicts all over the world have erupted, and world peace is but a thing of the past. As the leader of one of 16 nations, you must develop your economy and military in a bid for world domination among other countries bent on the same goal. To win, you must conquer most othe countries via economic prowess or military might.

Billed as "a game of high-stakes international brinkmanship, economic power plays, and gunboat diplomacy," Third World War spectacularly achieves this lofty claim by offering plenty of options and an intricate mechanism that links everything together in a complex chain of causes and effects. For example, you can conscript a large number of soldiers into your army, but that will negatively affect your GNP (gross national product - measures of a country's total income, so to speak), level of international trust, and increases burden on the government budget. On the other hand, you can concentrate your efforts on expanding your country's GNP by developing domestic industries, but doing so may leave your defense weak, making the country more prone to attacks either by terrorists or nuclear weapons (a small economist's quibble here: it would be more appropriate for the game to call it GDP not GNP, because it focuses on income produced domestically, not income produced by the country's nationals). You can attempt to conquer other countries by dominating their economy (via foreign investment), give aid to terrorists or revolutionaries, manipulate the media to increase your public support, and many more options. The amount of choices you have in the game, and how much balance you have to strike between different factors, is nothing short of astounding - let alone in a console game. There is plenty of nice touches of realism elsewhere as well. For example, you will get $800 million a a month for each country you dominate. But any military damage you inflicted on this country, if you conquered it by force, will be deducted from this amount until you have paid all the damages. You can issue 3 commands per turn at the start of the game, but as you expand your country's reach, this number will increase.

The game offers 5 very different scenarios, all of which are interesting and require different strategies to win. These include the (almost obligatory) Cold War scenario, a "third world countries are very strong" scenario, and one where it is best to win using economic prowess. Although you cannot directly toggle the difficulty level, your choice of country to lead effectively gives you different difficulty level. Start as an existing superpower like the US or Japan to have a relatively easy game, or lead a relatively 'weak' third world country for a real challenge.

In every aspect, Third World War is a top-notch wargame that every fan of the genre should try, whether or not you like the SEGA CD console. It is deep, engaging, and a lot of fun. My only gripe is that the battle controls are a bit awkward, but that is a nitpick compared to how good the rest of this game is. Every PC wargamer should download the game, as well as the GENS emulator, to really try it out - because it is well worth the 5-10 minutes of effort it will take to get the game running on the emulator. 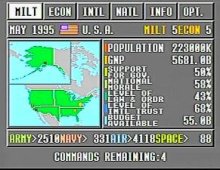