Nuclear War 3: Ground Zero is an excellent fanmade remake of New World Computing's Nuclear War. The game is the third installment in RC Software's line of Nuclear War remakes that dates from 1997. Game rules closely mirror NWC's classic with some tweaks: Nuclear War is a turn-based "world domination" wargame where up to five diffrent leaders use nukes to conquer the world. Players start the game as leader of a country with four cities, each with population between 5-35 million. The simple goal in Nuclear War is to wipe out the other countries by bombing or using propaganda against your enemies' cities. When you begin the game your country as 2 10 MT Warheads, 1 20 MT Warhead, 2 10 MT Missiles, 1 20 MT Missile in storage ready to be used. There are five diffrent orders you can issue, but you can only issue one order per turn. The orders are: Build Weapon, Propaganda, Prepare Missile/Bomber, Launch Warhead and SDI.

This version of Nuclear War adds user-definable random events, many opponents with unique personalities including George W. Bush, Godzilla, and the game's authors (!) Too bad the game doesn't capture the same wacky sense of humor as NWC's original game. Still, by and large the gameplay carries the day. Most computer opponents don't pose a serious challenge, but fortunately you can play against other human players over the Internet. You can even create your own characters to use in the game by importing a graphics file to use as portrait and designing the attributes. If you like the original game, you will probably enjoy this excellent remake. Don't expect it to be funny, though.

Note: the game is coded in Java, which means it will run on any machine (Windows, Mac, Polaris, etc.) that has "Java Runtime Environment" installed. 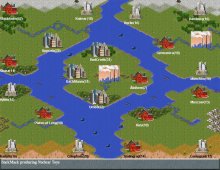