One of the most unique boardgames ever released is a good example of a great game concept sunk by poor execution. Theatre of War's original mix of chess, wargame, and boardgame elements and the real-time component lies beneath its incomprehensible interface, AI quirks, and the too-abstract ideas that weren't translated well. The game itself is a curious mix of each unit must follow a set of movement and attack rules similar to chess, but with wargame abilities thrown in. Could be fun if you understand its highly abstract concepts. 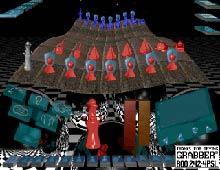