This is pretty much a game of strategy. I first got this game in 1992 ( i think ) for my birthday from a guy who was my best friend, and he still is after all these years. Anyway, the object of the game, simply is to blow up the other tank. You can have up to 10 people playing at once, on the same keyboard, or you can have a mix up to 10 AI Tank's/Human players. Mr Stupid, only of the computer players, isn't always the most stupid guy out there, he can actually be pretty sly sometimes ;) At the end of each round you have the option of buying newer and greater weapons based on the amount of money you have, and if you have the money, you can choose from *a lot* of things. This game is a good one for old times' sake, and can be really addictive if you're just sitting there and playing it with a mate, a must download!

Tank Wars is very similar to the more popular game called Scorched Earth. It offers the same features although in a bit different way but overall it will similar to all people that have played Scorched Earth. When you start the game you are presented with a menu where you can select different options (this should be something that was done with all games in this kind of genre) and then decide on how many players (read: Tanks) you want to play with. You can play with several human players as well as computer controlled tanks.

After each round you have earned a certain amount of money (based on how long you survived) and you can then buy new equipment that will help you in the next level. Many different items are available for purchase and this adds a lot of fun to the game since it would be a bit dull if you only had regular missiles. You can't really move your tank - you can only turn it in order to aim correctly.

The graphics aren't impressive - especially when you compare it to Scorched Earth. Overall I wouldn't recommend Tank Wars if you have the choice between this game and Scorched Earth. Not only because of the game interface and graphics but also because of the fewer items that are available and overall game quality. Tank Wars is not a bad game though and can be quite funny if you are playing several human players at a time.

A simple but very enjoying game. By setting angle and power you try to hit your enemy's tank before he hits you. This sounds boring, I know - but it isn't. It's best played against a friend, but playing against the computer is a nice thing as well. Oh, of course you don't need to play against only ONE computer - you can play with up to 10 players - although that is a bit stupid in my opinion. After each round you get some money according to how long you were able to survive - of course the winner gets most. You can buy some nice extra weapons for that - nice feature.

One of the best multiplayer freeware titles ever made, Tank Wars is a fun artillery game for 1 to 10 players. The goal will be familiar to anyone who has played Scorched Earth or Gorilla: opponents attempt to destroy each others tanks by firing various weapons at them. Pick a weapon, then choose an angle for its trajectory. Terrain, gravity, and the opposing tanks' weapons and relative positions to you are some of the factors you need to consider.

In addition to the fun and familiar gameplay, Tank Wars adds a lot of bells and whistles to make the replayability much higher. In addition to numerous weapons, there are also 7 levels of computer AI for you to compete against. Beginners can select the easy ones, making their way up to fight tougher opponenets. With up to 10 tanks in the playing field, the game is typically fast, hectic, and addictive. The graphics are standard VGA with no frills, but it's more than enough for the purpose of just blowing things up ;)

Note: the game was actually released as shareware, but registering the game (which cost $3) brings no new benefits aside from the author's promise that he would notify registered owners of new version releases. 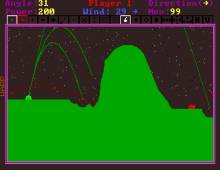 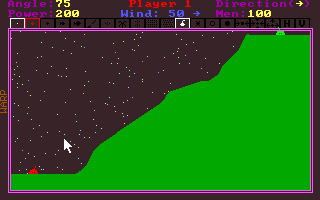 People who downloaded this game have also downloaded:
Scorched Earth, Settlers II Gold Edition, The, Lords of The Realm 2, Civilization