The predecessor of the well known Worms games, made by Wendell Hicken, a solo programmer. Great multiplayer option will provide hours and hours of fun. Your goal - destroy the enemy artillery unit by selecting the right angle and speed. For every win You'll get a sum of money to buy new weapons and/or shields and do the same again. Very, very fun game.

A real classic offering it's own unique game style not seen in any other game. You control a single tank mostly located on a mountain or hill and you have to fight against up to 9 other tanks either computer or human controlled. The game is divided up into levels with only one winner on each level. The more tanks you destroy the more prize money you get. And of course you also get what is most important that is if you manage to win. Of course it's harder to win the more tanks involved in the game and sometimes you don't even get the chance to get your turn since there is a risk that 9 tanks before you have gotten the chance.

After each level you have the possibility to buy extra weapons like weapons that can shoot so the bullet rolls on the ground until it hits something, larger missiles, nukes, extra fuel, parachutes, missiles that spreads and several other nice weapons as well as laser shields. The more you have the easier it will be to kill the other tanks of course but it is always a good idea to have extra money in your pocket since you can play some levels where you are simply unlucky (whether it's your placement or when you get your turn) so you have extra money to buy equipment. If you continue to lose while your opponents win or at least get most of the money it's very hard to get back and be able to kill any of them since they will all have huge weapons and shields while you only have your regular cannon.

Scorched Earth is based on one hell of an idea and the result is simply great. The game offers tons of gameplay and having the option to play up 10 human players will give the ultimate gameplay to you and your friends. Even playing just against the computer is fun and you can afford not to concentrate on each level as you can always get revenge on the next level. The actual controls are very easy since you simply turn the tank by moving the canon enough to one of the sides and as the game is meant for that you actually drive in the tank it can't be less complicated than this. Recommended for everyone.

A great example of a simple, but ingenius concept. I played a simplified version of the game more than ten years ago on the C64 of a friend. Well, we played it for hours. And now the same game, but with some more options - buy different weapons and play against up to 9 opponents that can be played by friends or by the computer, which strength can be set individually. You just need to choose your weapon adjust angle and power of the shot and hope you do better than your enemies - boring? NO!!! Your tank can be equipped with auto-defense, nukes, "funky bombs" and so on... Depending on your ranking after each round you receive money to upgrade. A great classic!

Scorched Earth is a simple, yet very exciting artillery combat game, based on a long line artillery games that began with Atari's classic arcade game Lunar Lander. At its most basic level, Scorched Earth is a 2-player tank action game which requires you to learn only a few basic keys to play. You adjust the power and angle of your gun, then launch your weapon to blow up other tanks. That's basically it-- nothing Lunar Lander veterans haven't seen before.

But what makes Scorched Earth much more than a Lunar Lander clone is that it can be much more complex. You can play with up to nine other players at a time, mixing computer players with humans (teamplay mode is available). The game offers a wide range of weather conditions and terrains, each of which affect your blasts in ways that obey the laws of physics (e.g. wind factor and gravity). You can earn money from successful battles, and use it to invest in additional weapons and accessories. The game boasts over thirty weapons, some of which are quite imaginative such as the fearsome Death's Head and Napalm. Using powerful weapons can vaporize the landscape, and you can even use a sandhog to slowly burrow a hole from beneath your opponents and watch them fall to their deaths. Quick death or slow death-- there's plenty of weapons for your killing pleasure ;) Accessories, of which there are fifteen to buy, are divided into Guidance Systems, Defense Systems, and Miscellaneous. Guidance system accessories are various types of homing weapons, e.g. heat seaking missiles. Defenses include parachutes and shields. Miscellaneous category includes other useful gadgets, such as Fuel Tanks which allow your tank to move around the battlefield. The interface takes some getting used to, and you must memorize a few key keyboard shortcuts, but it's a breeze once you learn it. Last but not least, you can even choose the enemy tanks' behavior if you play against the computer. For example, "moron" is self-explanatory, "poolshark" tries to rebound shots off the walls and ceilings to hit you, and "spoiler" is very tough to play against because it will get almost a perfect shot every time.

With a plethora of options and truly addictive gameplay, Scorched Earth is highly recommended for action fans, especially anyone who wants to blast his/her best friend for a while ;) While Scorched Earth may not be "The Mother of All Games" as it proclaims on the official site, it's one of the best 2-player games you'll ever play, and a design that truly stands the test of time.

Many, many moons ago, the larger part of the PC users, had a small nifty program called QBasic. On it, we played games like Nibbles, (these days infidels refer to it as 'Snake') and Gorilla. Gorilla was a simple game, two gorillas would stand on tall skyscrapers, with the goal to kill each other with exploding bananas. The user would play one of the monkeys, enter the angle and velocity to throw the banana with, and hope for the best. The simple but very addicting gameplay kept me sticking to the screen for hours on end. This specific genre has always been a bit of an underdog, with a small, but steady group of fans. Even though Gorilla came out before Scorched Earth, the latter has always taken the credit for being the starter of the genre. But then again, it deserves a title like this, other than the self-proclaimed 'Mother Of All Games' title.

Scorched Earth works with the same principle as Gorilla. The computer places small tanks across a randomly shaped landscape, and then they take turns in shooting each other. As the player, you can either commandeer your tank against remarkebly good AI-controlled tanks, or you could invite some friends, and blast each other to smithereens, which always is more fun than playing by yourself. For each tank that you destroy, you receive money, with which you can buy more dangerous weapons and cool items after the match is over. And thats where Scorched Earth stands out in the crowd. The number of weapons you can buy is impressive, and they all have their own pros and cons. The items are smaller in number but very useful. Shields, gravity-manipulators, parachutes, that kind of stuff. All of this makes sure that the game is still interesting enough to play after 10 rounds or so. The more money you make, the better the weapons you can buy. The better the weapons you can use, to more tanks you can destroy. Its exciting from the start.

Of course, the computer opponents' AI can be customized in a couple of different difficulty levels, and you even get a chance to choose what their tanks will look like.

Graphics- and sound-wise the game is no biggie, even back then, but it more than makes up for it gameplay-wise. And the fact that about every single feature in the game can be customized, keeps it interesting for a long time. If you do ever feel that you need some eye-candy too, try to get your hands on one of the 'Worms' games, which in some views is superior. But it won't have the same nostalgia-factor as Scorched Earth.

This is a really, REALLY fun game!! Its games like this that gives Freeware a good name. Although released for free, its game play is worth more than a lot of games that are up for sale!

Basically, Scorched Earth is a type of war game which involves you as the commander of a 2D missile unit, with an objective of blowing up anything in sight that's not on the same team as you.

You can play with friends, or against the computer. I usually choose 2 player games and play against myself - this way I don't have to wait for the opponent to play, I can just take both goes.

You get to choose from a mass array of weaponry, and then, once all gunned-up your aim is to go into battle and, well, aim at your opponent and FIRE!! The best weapons are the missiles; I usually load them up, set the power at which I want it shot out, along with the angle and range, and then shoot. It's a game where you have a go, then wait for your opponent, and if they haven't hit you, you get another go. I prefer games this way sometimes, instead of games where you just have to just keep shooting until you blow the hell out of the other guy. This way involves some strategy and intelligence!

The graphics in this game are *really* simple, so don't worry if you don't have the latest ATI graphics card, as this game will work with even 1mb-onboard graphics, which is cool as it means you can play it on any pc.

The sounds, well, there aren't many. Unfortunately they come from the PC Speaker instead of the Sound Card. It would have been nice if they was Sound Card based as you could have played a nice little music score with it, although the PC Speaker has all the effects you will need to give the game atmosphere.

I love this game because it is so simple, and yet so fun! This game is perfect proof that you don't need boosted graphics to have great game play. I recommend everyone to download it, it's especially fun to play if you have a laptop and are travelling. Fortunately it works great on my old 486 laptop. 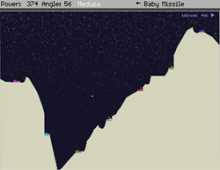