One of my most favorite Apple II games ever and one of the best trading/economic games ever made, bar none, Taipan! is a masterpiece from Art Canfil and Mega-micro Computers that turned many gamers into hopeless addicts when it was released in 1982 and inspired a whole new genre of trading games.

Loosely based on James Clavell's best-selling novel Tai-Pan, the game lets you play the role of an ocean-going trader doing business in major Asian ports in mid-1800's. Your objective is simple: make the most money by trading and pirating. Based out of Hong Kong, you'll sail from harbor to harbor buying commodities including opium, silk, arms and "general" goods at a bargain, and sell them at a higher price elsewhere.

At the beginning of the game, you can start the game with either some money you borrow, or five guns with no debt. If you choose the latter, then you'll be dealing with Elder Wu, the moneylender. However, it might be better to have guns, because the Oriental seas are filled with pirates. When this occurs, you can attempt to run or fight back. Sinking enemy ships can earn you plenty of booty, but fighting can damage your ship severely. Occasionally, you can sail to Hong Kong to have your ship repaired. You'll also encounter Li Yuen, who will try to extort money from you. If you don't pay him off, he'll send his band of pirates to pester you, but fortunately they can be defeated.

What makes Taipan! a truly timeless classic is the excellent implementation and gameplay variety that encompasses different genres, from arcade in ship-to-ship combat to strategy in trading. Striking a balance between trading and pirating is key to success—as well as wisely investing your profits. You can keep extra funds in the bank for safekeeping, and even earn some interest. You could also borrow money from a bank or a moneylender. It is easier to borrow from the moneylender, but he charges exorbitant interest and starts breaking legs if you don't pay back on time.

Overall, Taipan! is a timeless masterpiece that you will keep coming back to. The combination of skill, reflexes, and luck (you'll never know when those muggers will show up) makes the game challenging and new every time you play. It's unfortunate that the PC version was never made.

Note: one of the "bugs" in the game allow you to repay the moneylender more than you owed him.. thus making him owe you at the same high interest rate! This means that a little investment early on in the game made you a multi-millionaire in no time at all. Obviously if you choose to exploit this bug, you'll find no challenge whatsoever out of the game, so cheat at your own risk ;) 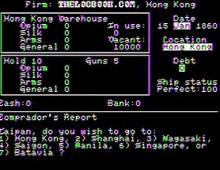