Taipan - the legend is brought to the Windows operating system. This is a fanmade remake of the original game for the Apple II - and it features great gameplay in the environment of a true classic. The story is quickly told - you start off in the Hong Kong of the 1860s. You are the captain of a small ship and of course strive hard to become rich - a respected Taipan. You either begin with a little money you have lent from the local money lender who will charge you 10% a month, but would not normally lend someone without money anything (he will always lend you up to two times the amount you already have) or you start with 5 cannons on your ship but without any money (which also means no chance to lend anything). The last option might be the better one as in case you encounter some pirates you are not only able to defend yourself, but if you defeat them you will also get some thousand bucks.

The rest ist basic trading - buy low, sell high. Try to trade with the most expensive goods as fast as you can. Yes, that's opium - we're in east asia in the 1860s, remember? If you see opium for a low price in Hong Kong buy as much as you can - fill up your warehouse and hope that the prices will rise (and they will) - then sell and soon you'll be filthy rich. ;)

However there are also dangers on your way up to fame and fortune - Li Yuen will ask you to pay for his pirates not attacking you - while in the beginning he won't ask much once you got a few millions in your purse his greed will increase. If you don't pay you can count on him sending out a larger fleet to convince you that it's wiser to pay. Of course you can play the tough guy and refuse to pay - the largest fleet I encountered so far consisted of 36 ships which I was lucky enough to defeat with a single percent of my ship's status being left after the battle. Still - the repair had cost me about 10% of what Li Yuen asked of me before. I have to add though, that I also lost my ship to a fleet of that size before - don't count on winning!

The game is not THAT hard, but got a nice atmosphere and its concept is easy enough to understand to have fun very fast and you'll see how much of a capitalist you are when you just can't get enough. My first gaming session got me up to about 150 millions - there's this certain addiction just making you want to increase your wealth a bit more to see if you can make it to the next higher title (I was "Master Taipan" at 150 millions - and that's not the highest). To make it short - this game's a must.

Taipan for Windows is a great fanmade remake of Taipan!, a classic historical trading game for Apple II based on James Clavell's best-selling novel of the same name. This version is extremely faithful to the original - it even includes the notorious "negative debt" bug from the original game, which you can toggle on and off from the Options menu! A nice Windows-based interface and the same addictive gameplay as the original makes this the version to own if you miss the old masterpiece. For more explanation of why Taipan! is one of the best games ever made, read my review of the original classic on this site. 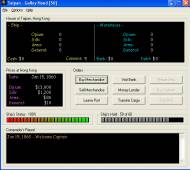