Survival is an obscure post-apocalyptic strategy game from InterActive Vision that deserves to be much better known. Set in a bleak post-nuclear war world, your job is to take a band of ragtag survivors out from the bunkers and forge a living from the desolate landscape, while dealing with other survivors and dangerous mutants. In its focus on survival, Survival offers an interesting twist on the Civilization-style conquer-the-world formula.

You begin the game with a group of between one and two hundred people. While your daily objective is simply to survive, the ultimate objective is to guarantee the survival of your people. To do this, you must have completely explored the landscape, destroyed all your enemies, and built a stable civilization. Survival is similar to Max Design's Burntime, but the focus is on the larger strategic scale as opposed to tactical. You play the game by making choices from action screens and maps; the maps are used to control armies, building, exploration, and to see the overall picture, while the action screens are used to make decisions regarding production, R&D, and education of your populace. You will need to decide on your strategies from the beginning of the game. For example, do you want to educate most of your citizens quickly - which will give you a boost in production and building - or keep your citizens in a "breeding" environment to increase population? Will you use scarce resources to expand your modern empire, fund hi-tech development, or equip you armies?

Survival starts out slowly, but gets much more interesting as you gain access to more features and technologies with the passing of time. This gentle learning curve makes Survival a good introductory-level game. With plenty of gameplay options, decent graphics, and an interesting premise, Survival is well worth a look for all fans of "realistic" strategy games, or post-apocalyptic games in general. It may not be as stylish or as solid as Burntime, but it is not a bad game at all. Recommended! 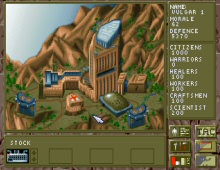