Storm Across Europe is a fast, exciting game that allows you to simulate World War II on a grand strategic scale - in as little as one evening. Every part of the raging conflict is covered - from North Africa to Sweden, from Gibraltar to the Ural Mountains in Russia.

While the battle rages, you must constantly juggle limited resources between production and advanced research. Multiple scenarios and the ability to change starting levels for each country allow for endless variations. Up to three players can play this game, with the computer able to control the Allies and/or the Russians.

In grognard M. Evan Brooks' opinion, this game is "... similar to the boardgame Hitler's War , except the computer interface was much more awkward. The graphics were primitive and the documentation somewhat sparse." Martin Scholz would later revisit the subject in 1993 and designed Clash of Steel, a much-needed improvement over this embarrassingly unplayable and frustrating game. 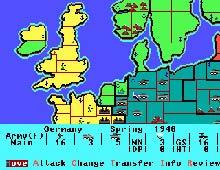 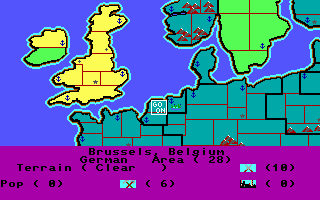