The "lost sheep" of QQP, World War II was released with even less fanfare than QQP's usually modest ad campaigns, perhaps because the company was hyping its more ambitious navy wargame The Grandest Fleet-- a wise choice, considering World War II's abstract gameplay that may not appeal to the majority of wargamers. Still, it's a solid wargame that has all the hallmarks of QQP games: solid AI, fun scenarios and complete player history. 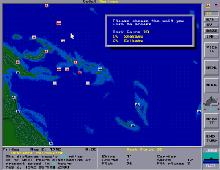