Spice Trade is a very interesting historical business game that is based on a unique perspective as far as computer games go: an Arab merchant living in the 14th century, when Europeans were starting their "great voyages of exploration" across the continents. Your character is named Abu Al-Qazzaz, a poor young man from Baghdad who has inherited a house and some land. Having decided to try your luck in spice trade for a living, you also have to start a family, expand your business, and ultimately prevent the European powers from dominating not only the spice trade, but also the whole economy and culture, in the Arab world. At the same time, your gradual success will help Arab countries spread their economic and cultural influences in Europe.

The gameplay is turn-based, similar to Holistic Design's venerable The Merchant Prince. As a merchant, most of your time will be spent on buying and selling spices in bazaars all over the world. What sets Spice Trade apart from the likes Merchant Prince is that the authors managed to successfully integrate the rich, unique, and captivating elements of Arab culture into the game. For example, similar to Europa 1400, it is very important to get married and have children so you can ensure successors. But as an Iraqi, you can have multiple wives (probably this is the only game that shows you the "wives counter" in-game), and as a devout Muslim you cannot neglect praying (typically by using the praying carpet in a hermit's cave) and building shrines once you have sufficient wealth.

Spice Trade is more similar to Europa 1400 than The Merchant Prince: the game is more of a "life simulation" than a historical business game. There is a plot, which unravels as you play (usually via a storyteller who appears from time to time). You can also talk to many characters to get jobs, find items in the graves of the god kings, and receive "quest items" by talking to special people. You can also get poisoned, hire shady characters in the port area, and get fatigued if you go without resting at home for more than 1-2 days.

The game's underlying economic model is not as realistic or flexible as the ones in Frog City's Trade Empires or The Merchant Prince: for example, prices and demand remain high for a long time even after you flood the market with some spice. Still, it is not so unrealistic as to be glaring or annoying, so casual gamers need not worry. Once your business starts to grow, you can buy fields to grow the seeds, and sell spice harvest in the bazaar. There is always business to conduct, characters to talk to, and interesting political/economic events to keep track of. Last but not least, the game's graphics (which mimic Arabian murals of yore) does a great job of evoking 14th century Arabian cities. If you like business games in exotic settings, or adventure games with a strong strategy bent, Spice Trade is well worth your time. The authors' success of making the game true to the Arab mythos more than makes up for the game's sub-par economic model. Highly recommended to everyone but those who demand tough strategy games. 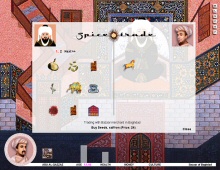 People who downloaded this game have also downloaded:
Stronghold, Settlers II Gold Edition, The, Machiavelli The Prince (a.k.a. Merchant Prince), Startopia, Imperialism 2: The Age of Exploration