Siege! is an interesting and unique board game that plays like a more 'real-world' version of Checkers. Your objective in the game is to control the most territory on the board after a given number of turns.

The game is a lot of fun for the first few games, but it becomes repetitive after that because the limited board size (8x6 = 48 tiles total) and limited rules do not allow for a wide range of strategy. The computer players supposedly learn from their mistakes, but after losing 10 games to me in similar fashion I doubt that is the case. Fortunately, you can play against a friend via hot-seat, modem, or LAN. Overall, a unique board game that is long on innovative ideas, but short on longevity. Worth a look, though. 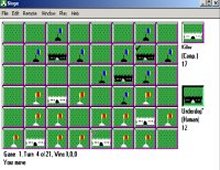 Siege! (a.k.a. Freedom Under Siege) screenshot