Settlers of Catan (2002) is yet another fanmade PC clone of classic German board game of the same name, originally published by Kosmos Games and later in the U.S. by Mayfair Games. For anyone who's never played the game, Settlers of Catan is a board game for 3-4 players (or 5-6 with the expansion set, which this PC version doesn't include). Each player is the leader of a tribe who tries to settle on the same island as all the other tribes. Players build settlements, roads and cities on the island, using raw materials gained from the island itself, including coal, wood, and wheat. The winner of the game is the first person to reach 10 victory points, which are awarded for various empire-building actions.

Since the board is made by arranging hexagonal tiles together in a sort of random way, it's different every time you play. I find myself scanning the layout, quickly trying to figure out the perfect strategy this time around. Should I try to monopolize the ore lands and the ore port so I can produce and trade copious amounts of ore, or should I try and settle near the forests and brick quarries so I can get the goods to build roads? Should I place my first two villages close enough so I can link them later in the very long road I plan to build, or should I place them as far apart from each other as possible to minimize the danger of finding all my roads blocked off by roads belonging to other players? There is a Robber piece too! All in all, this fanmade version of Settlers of Catan is a very faithful reproduction of the boardgame classic, with competent AI and better graphics than many other fanmade PC versions, including the 1998 one you can find on this site. 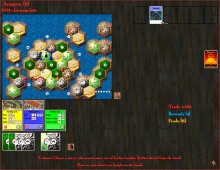 People who downloaded this game have also downloaded:
Settlers of Catan, Settlers II Gold Edition, The, Magic: The Gathering, Civilization