Settlers of Catan is a faithful reproduction of the board game of the same name. You and three other competitors are newly arrived settlers on the undiscovered land of Catan. You must expand your settlement by gathering or trading resources to build towns and roads, eventually building a settlement large enough to win the game. This game is a pure strategy board game, and unlike many other games with a similar premise, warfare plays no part whatsoever.

Settlers of Catan is a very popular board game, and it's easy to see why. Its elegant system is quick to learn, yet hides a myriad of strategies of trading or expansion. Its emphasis on peaceful expansion is a change from your typical "get an army and kill things" style, and means anyone used to playing Civilization must adapt their strategy.

This version of Settlers is a strong reproduction of the board game, nothing less, nothing more. For those who have never played the board game, the game may seem confusing or dull compared to Civilization and its ilk, and the game certainly doesn't have any pretty graphics or sound effects to keep you entertained. Also it's not as much fun playing with computer players as opposed to humans, although the AI is pretty decent.

All in all, if you've played and liked the board game of Settlers then try this. If not, it probably won't hold your interest.

Settlers of Catan is a great computer version of a popular board wargame. The players in the game are settlers in the undeveloped land of Catan. You build roads, towns, and cities along the edges of different kinds of lands, and reap the harvests produced by those lands. You can trade commodities with other players or through ports with the bank. The players compete to build the longest roads and the most towns and cities.

Since the board is made by arranging hexagonal tiles together in a sort of random way, it's different every time you play. I find myself scanning the layout, quickly trying to figure out the perfect strategy this time around. Should I try to monopolize the ore lands and the ore port so I can produce and trade copious amounts of ore, or should I try and settle near the forests and brick quarries so I can get the goods to build roads? Should I place my first two villages close enough so I can link them later in the very long road I plan to build, or should I place them as far apart from each other as possible to minimize the danger of finding all my roads blocked off by roads belonging to other players? There is a Robber piece too!! This is a great game and one of the better computer versions floating around on the Internet. 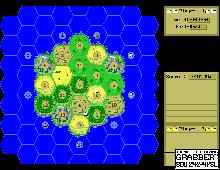 People who downloaded this game have also downloaded:
Settlers of Catan [2002], Settlers II Gold Edition, The, Magic: The Gathering, Settlers, The (a.k.a. Serf City: Life is Feudal)