Probably one of Keypunch's best releases, Santa Paravia and Fumaccio is a fun empire management game with a strong emphasis on economics. Up to 8 players compete against each other in a bid to become the best ruler of a fictional Renaissance country. Gameplay is turn-based, with a very strong boardgame flavor. Each player takes turns issuing commands in different "phases," deciding on policies ranging from economic (e.g. how much grain to sell and release into public consumption, when to build marketplaces), military (e.g. when to buy additional forts and raise more platoons), and civil (e.g. how harsh a justice you want to dispense to your citizens). Lack of dynamic screens may make the game too "dry" for most gamers, but anyone who likes a thoughtful, statistics-based business game will probably find it interesting.

Lack of save game feature makes the game ideal as a quick multiplayer business game a la Monopoly that anyone who is interested in medieval business will enjoy, if he/she can get friends to join a game. Those who are looking for a more authentic Renaissance experience would do well to skip this one, and play Holistic Design's Machiavelli The Prince instead. 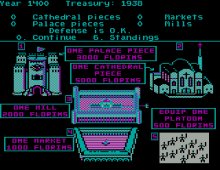