In M. Evan Brooks' words: "Released with the same name as its [awful] predecessor..., this remake suffered from mediocre graphics and play value. A number of gamers swear by this; I swear at it. The game turns are simply too long, and the sailing maneuvers become a matter of random guessing as to what the enemy will do. Action and reaction do not occur; instead, tactics seem more akin to paramecium movement; the campaign game consists of a four-month cruise only as the Americans in the War of 1812." 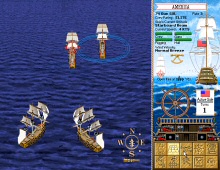