Sacrifice is a tremendous masterpiece from Shiny that ranks as one of the most unique and compelling strategy games ever made. Despite a plethora of glowing reviews from critics, the game's sales figure was merely lukewarm, making it one of the most underrated classics. Some excerpts from the excellent review at IGN explains why:

"Sacrifice is a little hard to describe if you aren't sitting in front of the computer looking at it as we discovered when I tried to explain the game mechanics to the rest of the guys here while they were loading up for some multiplayer fun. Basically, it is an RTS game with action and role-playing elements in it. The default camera view is stuck behind the head of your wizard. You can rotate the camera around his head and zoom in and out but it will always follow you around. Unfortunately there are a couple of little problems when climbing large mountains that make it hard to see what is going on. Mostly though, it works very well and gives an incredibly frenetic feel to the action that makes you worry about not only your creatures but yourself as well.

Anyway, your character is your general, wizard, unit factory, research bay, resource collector, etc... All of the normal buildings and producers of a normal RTS rolled into one. There are two resources in the game and come in the form of souls and mana. There are a set number of souls on a board, so the more you get, the less the enemy has. So how do you get souls? You convert them with one of your spells. Once they are converted, you can use them to summon creatures. Each of the creatures has a different soul and mana cost to summon depending on their strength and abilities. You need mana to cast all of these spells, so that means you need manaliths. Manaliths are structures that are used to collect mana from the mana fountains. Once you have a couple of those, you are good to go.

The main point that I need to get across here is that you are going to have to abandon your ideas about the traditional RTS. This game does not play like one. There is an extensive tutorial series to help you learn, but you really have to spend some time with it before you can get the strategies down. But the single player experience lets you build up slowly and forces you to utilize a lot of basic strategies as you go.

Spells in Sacrifice are divided into three different categories that are conveniently located at the bottom of the screen an easy to use interface that takes up almost no space. First we have the creature spells. You'll be using these the most as creatures are the brunt of your offensive. As you go through the game and increase in level, you gain new creature spells depending on which god you are working for at the time. The creatures in Sacrifice range from the downright bizarre to the horribly twisted. You'll get the more normal creatures like Persephone's Rangers to the huge multi-winged insect like Phoenix of Pyro to the freaky Abominations that throw bits of their intestines at enemies. Some of the creatures have the ability to cast spells as well. If you have a bunch of creatures selected, the highest-ranking creature's ability will be used. It's a nifty way to organize things and can really pump the strategy value up.

The next set of spells is the effect spells such as direct damage and healing spells. And these are a doosey to behold. When you get into the higher levels, there are some incredible spells that do a whole lot of damage and affect tons of creatures. You can see some of them in the shots below, but man, when you're in the middle of a fight and a volcano erupts beneath your feet, it really scares the crap out of you. All of these spells are designed to get you into the action along with your troops. It definitely adds an element of danger and excitement that gets addicting really quick. Running around the field casting lighting or frost spells is a riot. And like all Shiny games, there is some great humor as well. James actually has a spell that shoots a cow into the air, which proceeds to flip, tumble, and dive into the target causing shockwaves and mass damage. It's fun and deadly. A great combination.

The last category of spells is the structures. These spells are used to build your manaliths, attach guardian creatures to manaliths and altars, desecrate enemy altars, convert souls, and teleport around the map. The teleport function is really terrific as the maps are pretty large. This way, you can zap around to any of your structures in just a second.

So what's the point of the game? Well to prove that you're the baddest wizard in the world. Well, there's more to it in the single player. The story behind the game goes a little like this: You play the role of a wizard that has traveled across space and time to escape the destruction that was destroyed your home world. You land in the astral realm of the island world that Sacrifice takes place in and find a world that has been split asunder by the follies of man. The world is made up of many islands floating in a sea of nothingness. Each of these islands is owned by one of the five gods: Persephone goddess of life and justice, Charnel god of strife and slaughter, James god of earth, Stratos god of air and the heavens, and Pyro god of fire and destruction. As a wayward wizard, you may ally yourself with any of the gods. Each will grant you different spells and boons as you increase in level. You begin your adventure by picking one of the five gods. Finish whatever menial task was given in the first level and then the story really begins. An old prophet appears to the gods and tells of the destruction of the world and that it is brought about by one of the gods. This of course sets off the petty personalities and a war begins in which you will play a huge part.

How you play this part is up to you and one of the reasons that this game has so much replayability. You are given the choice of the five gods at the beginning of each level (at least for a while but hold on a sec). When you run up to their likeness, a small explanation of the task they desire will be explained to you. There are nine missions for each of the gods plus the final level for each. So you can go through the game working for just one god, or go through working through each of them. You'll receive different sets of spells from each god, so using the rounded approach may be a good idea.

You will eventually need to make choices. The gods aren't really fond of each other and some will eventually give you an ultimatum. For example, when I was playing the game through as an avatar of Persephone, Charnel got a bit testy and told me that he would close off his help if I went any farther. It adds an interesting element to the game that is fun to experiment with.

Levels come with a bunch of different objectives. The one most used is the desecration of an enemy altar. Each wizard needs an altar, so you gotta get to the enemy altar and sacrifice a creature to desecrate it. It looks beautiful and you can hear the grunts of dismay from the creatures being sacrificed. Other objectives include finding certain creatures and killing them, or destroying a structure, or finding some information. But all of these objectives will be frowned upon by at least one of the other gods, which means you'll be hearing from one of that god's friendly little wizards. And that is when the fun really starts. The computer can be incredibly ruthless. And in some of the later levels, they start out with a whole lot more than you do. And it gets butt hard. But still, it is beatable, it just takes a little creativity and planning and the ability to remember to save when you do something right.

Then comes the multiplayer. Oh this is some fun stuff. There are a few different games to choose from that will have you desecrating altars, killing creatures the fastest, capturing manaliths the fastest, collecting souls the fastest. These games are all a buttload of fun and take different strategies to win. It certainly adds a whole lot of fun as you can pick any wizard from the game and any of the gods you like. There are options to set your wizard's level to start and stop at any level, cut off and on friendly fire, add souls and neutral hostile units. We've had a lot of fun playing although the AI in these multiplayer games doesn't see quite as ruthless or bright as it is in the single player game. There are only four players allowed in each game, but any more and it would be a bit too chaotic for your own good.

And now that we've gotten all of that out of the way, I see that I've completely left out one of the most impressive aspects of the game, the graphics. It is one of the most artistic and impressive works I've seen in the industry in a long time. Not only are they beautiful but they're also incredibly creative. The creatures especially are just a joy to zoom up on. And the landscapes! Wow they're nice. And the engine allows for a far depth of field and still runs very, very smoothly. And then there's the sky, and the special effects... Amazing, just really amazing. And the kudos keep rolling in with the incredible sound quality that this game delivers. The voice-overs are excellent coming from both no-names and big names such as Tim Curry (who does a great job as Stratos by the way). Everything is done well. The music, the effects, the speech... Man alive, the production value on this game is high.

So what does this all mean? This means that if your computer can handle this game, and if you like action and strategy games, you need to go out and buy this game now. You'll find tons of fun with going through the single player game in different ways and tons more fun with the multiplayer. And they include a very easy to use and powerful editor to create your own scenarios and multiplayer levels. You can import your own sound bytes and all of that good stuff to create your own storylines and campaigns. This is a hugely robust game overflowing with character and creativity. Sacrifice shines like a freaky star in a field of overused ideas and clones. Go get it."

In the crowded arena of RTS, it is rare to find an addictive game. It is even rarer for that game to qualify as "art." With a superb blend of wondrous art and addictive gameplay, Sacrifice is a rare gem that every strategy fan should have in their collection and play at least twice. Highly underrated, revolutionary masterpiece. 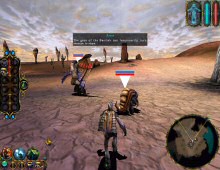