Not an impressive game at all. You have to defend the United States from Russia as they are launching several attacks via missilies and similar weapons.

The game offers different game play modes such as simulation where you fight other planes and various other forms of combat - too bad that all those game modes are getting worse and worse the longer you play the game. Not a good game at all and maybe one of the worst games from Cinemaware at all - and they usually didn't make low quality games.

Arguably one of the worst Cinemaware games ever, S.D.I. gets bogged down with control scheme that is so bad that the typical Cinemaware hallmark of cinematic feel can't rescue the game from being removed from your hard drive.

Let's start with the few good pooints in the game. The plot is a cliche mix of soap opera and cold-war tension, but is halfway decent. From the game's box: "Two star-crossed lovers hold the key to the survival of the human race. HE is a young general assigned to America's ultimate military space project, the Strategic Defense Initiative; SHE is a beautiful Russian commander hopelessly caught in the crossfire when ruthless KGB fanatics stage a coup d'etat in the Soviet Union. Can the young American save her? Can they, together, save the human race?" Uh-huh. Well, it's not Dr. Strangelove, but it's not bad.

Any positive first impression you have with S.D.I., however, will fade fast as you get into the game proper. There are three main phases: defending the U.S. against KGB missile attack, repair SDI satellites and dock with US and Space Stations in the same craft, and finally save your Russian lover from a KGB torture squad. The rescue operation is the most fun-- combining the best elements in shooters with Cinemaware's famous cinematic techniques. Unfortunately, you have to first endure the first two parts, which are very frustrating to play due to the awful red-green graphics in the IBM version. The 3D flight sim part is nearly unplayable due to poor and grainy graphics, not to mention impossible odds with enemy ships that appear constantly. My suggestion: play the Amiga version of this game instead, or Cinemaware's later classics. A good idea botched by technical limitations, so it seems. 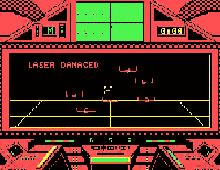 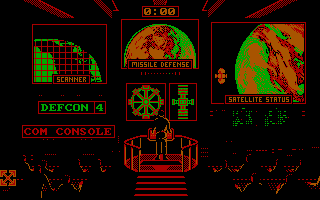