Robot Battle is a great programming game in the footsteps of Apple II classic Robot War. From the official website: "Your goal is to create robots or teams of robots to compete in tournaments against friends and other players from around the world. Robots fight in a rectangular arena, attempting to eliminate each other by firing missiles, scanning with radar, dodging, ramming, avoiding mines, and collecting energy bonuses. The last robot standing is the winner. Once a battle is started, your creations are on their own; you can not assist them. To win, you must have programmed them better than the competition. Robot Battle challenges you to design and code intelligent robots using a simple programming language. This makes Robot Battle both a challenging game and a fun way to learn programming.

Programming in Robot Battle is focused on strategy rather than low level optimizations. The game rewards robots with the best strategies rather than those with the most efficient or best written code. This allows even inexperienced programmers to compete with more experienced professional programmers. If your robot is smarter and more adaptable than another player's robot, your robot will win even if your code is less efficient." If you enjoy programming games but find Robocode too daunting and MindRover too easy, Robot Battle nicely fills the gap. Formerly a shareware title, the game has been released into the public domain, and anyone can download the source code to improve it even further. 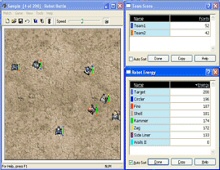