This fast and fun futuristic tactical strategy game is among the best "beer and pretzel" multiplayer games ever made. Despite a disappointing single-player mode (where entering commands for robots takes forever), the game is a lot of fun in multiplayer, where up to 4 players compete in various modes (e.g. "capture the flag") using robots. 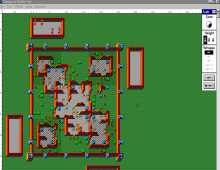