Rise of The West

Rise of the West is a fun political wargame based on SPI's outstanding Empire of the Middle Ages boardgame that focuses on the rise of Western powers at the beginning of the 14th century. Upto 8 players can play as European powers vying for control of the continent. Like its boardgame predecessor, the game revolves around "trading cards" that can be used for various policies. The typical conquer-thy-neighbor gameplay is enhanced by the fact that you must convert other provinces to your country's religion and language. In all, it's a fun and thoughtful game with a decent computer AI that may proves too abstract for some. For die-hard wargamers, though, Rise of the West is an intriguing historical wargame that is well worth a look. 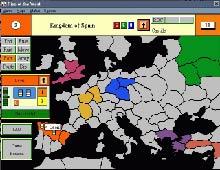 Rise of The West screenshot