Reunion is a worthy attempt from Amnesty Design (now Digital Reality) that follows in the grand tradition of space exploration / strategy games pioneered by Starflight. The game suffers from shortcomings that are similar to Maelstrom: cumbersome interface, too much micro-management, and snail-paced story that picks up only halfway through the game. The second half of the game is considerably much better, but you'll need a lot of patience to get to that point <G> Still, this is a great, story-oriented, epic sci-fi strategy game that all armchair commanders should take a look. 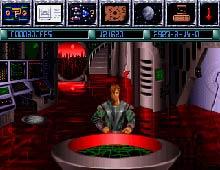