The first in an aborted Pure Wargame series, this late WW II game was disappointing in every respect: poor AI, confusing interface, and badly written manual. As loyal fan of the company, I can only speculate that the obviously premature release of the game was compelled in part by pressure from American Laser Games (QQP's new parent company) to quickly improve the company's shaky finances. Despite the interesting and less-known historical scenarios, the game was released way too prematurely. If you want to know what a bad QQP game is like, this is it. 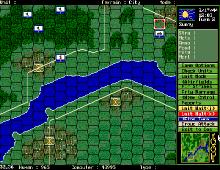