The massive Allied airborne assault to capture the bridges of Holland in 1944. In the words of wargame veteran M. Evan Brooks, this is "a tactical/operational simulation of the largest Airborne operation of World War II, this game suffered from graphic sensory deprivation -- determining the road network was a lesson in frustration. Also, input could not be readjusted in mid-play, and overall, the user interface was both clumsy and unforgiving." 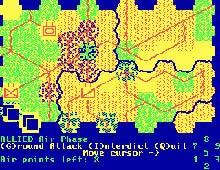