The last MegaTech game, and curiously enough the only one that does not feature semi-nude females in Manga (i.e. Japanese cartoon) style, PowerDolls is a fun, but shallow turn-based, squad-level tactical strategy game set in a futuristic world. The story is straightforward: in the far future, ?undesirables? and free-thinkers are shipped off Earth to colonize alien planets. After several centuries, Earth decides to reclaim its lost colonies. The PowerDolls are an elite team of loader pilots, aircraft pilots, and drivers, who defend their homeworld from imperialistic Earth forces.

Pretty graphics and neat anime scenes aside, The game itself is a pretty straightforward tactical game that offers nothing new to the genre. Each loader is allotted action units per round of combat, which can be used to move, fire, and so on. There is a good variety of missions, each with unique objectives that advance the plot, and an assortment of ordnance to accomplish them with. One interesting touch is that if a Warrior is killed, she is gone forever from the game. Run out of fighters, and it's game over.

Overall, PowerDolls is an average strategy game by today's standards. It offers more "bells and whistles" than many tactical games, but gameplay is below average due to poor AI and ridiculous number of enemies the computer tries to disguise with. The manga artwork is beautiful, but the actual in-game animations of the loaders on the battlefield are uninspiring. Recommended only to anime/manga fans and casual gamers. Die-hard FASA experts and fans of challenging strategy games should look elsewhere, particularly to MicroProse's underrated Mech Commander.

Note: Webmaster of Planet Omni fansite, has the following comments to add about the game:

"All the pilots are women, because of the finesse and reflexes required by a loader. Their statistics play a big role in actual combat. If you're using an Mc88 with a pilot who has a poor AG stat, you've wasted the AP's which could have been used for spotting, calling artiller (very important in some missions), or other mission objectives. Getting up close and personal with an X32 is only as good as the pilots close combat skill. I also find it refreshing to have a game where there isn't a single "kill everything" mission that has no real point. You can also fail a mission, and still win the war (game). You just can't fail too many. And pilots are not "replaced", you simply gain more as the game progresses, regardless of outcome. If a pilot is injured or MIA, it may take a turn or two for them to return (if at all). There's 21 members in all, once you're down to 6 it's game over, according to the manual at least. I've never tested that." 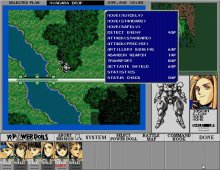