A primitive but interesting abstract wargame from the designers of Fire Zone, Power Struggle is essentially a poor man's Empire-- similar concepts and idea, but much inferior implementation and questionable computer AI. Choose to play as either "West" or "East" and mobilize forces across the globe to accomplish a simple goal: annihilate the opposite side. Gameplay is a cross between the boardgame Risk and Empire: forces are mobilize from a strategic perspective, although the game zooms into each country when combat is initiated. The only aspect of the game that is worth mentioning is the solid combination of both real-time and turn-based modes: while the game is essentially turn-based, each turn is timed so that you have less than a few minutes to order your units. This phased-real-time approach works well, and foreshadows later classics that utilize this feature, e.g. Space Hulk. Worth a look for anyone interested in the history of the genre, although without enough play value to keep anyone's interest for long. 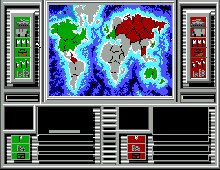