Nice computer version of popular board game Pictionary. The game principle should be widely known: one player draws clues about a given expression, so that the other can guess the wanted word(s). If you've got a couple of friends with you to play a round, it can get some fun. Though, gets boring very quickly to play alone with a computer drawer. Pictionary is also a useful drawing application, btw... sort of. ;) The drawing interface is decent, and computer AI is up to the task if you can't find any real-life friends to play with. It's a bit ironic to have computer players in this kind of games, though-- their pictures are pre-programmed, so if you've seen it once, you can always guess the answers. Still, the game has plenty of pictures (words) of varying degree of difficulty-- enough to provide more than a few fun play sessions. Recommended! 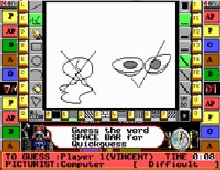