PaybackTime 2 is a great clone of the tactical combat portion of X-COM. The game is ideal for X-COM fans who want get right into the action without boring with a plot or campaign-level strategic decisions - because this game has neither.

Your goal is straightforward: assemble a team of deadly mercenaries, choose how many opposing teams you want to fight (up to 3), and then it's time to deploy your forces and commence the battle. As in X-COM, each mercenary has different attributes including hit points (HP), movement points (MP) reactions (RE), firing accuracy (FA), throwing accuracy (TA), and melee accuracy (MA). Since no one soldier would have high points in all attributes, it is important to assemble a well-balanced team that is appropriately equipped. For instance, it is much more effective to equip a character who has low HP but high FA with a sniper rifle, or someone who has high TA with a lot of grenades to throw.

The gameplay screen will be very familiar to every X-COM fan, down to the isometric viewpoint and unit graphics. Designed primarily for multiplayer play (up to 4 players), the game's computer players are smart enough to use tactics like stage ambush, sniping from long distance, and retreating when heavily wounded. You can change the difficulty level as well as realism level; the "extreme reality" mode is very challenging because as in real life, you can't see anything that is outside of your field of vision - no matter how many times you have seen it before (i.e. the vision won't be permanently shown on the map like in a typical game).

In terms of weapons and items, PaybackTime 2 is every fan's dream come true. It offers over 100 different weapons and 50 different items to choose from. Although it has no plot or story-based campaign mode, there is incentive to keep playing after you win one battle: you get to keep all the weapons and items you salvage (mostly from enemy corpses) for future battles, and you can spend skillpoints your soldiers earn to upgrade their attributes. You also get a lot of money from winning the battle. The loser, of course, gets nothing. You can use the money to hire better soldiers and/or buy more ammo and weapons. The game comes with a map editor you can use to create your own maps if you are bored of the few dozens included.

If you enjoy X-COM, Jagged Alliance, or similar games, you will probably enjoy PaybackTime 2 as well. It's very well designed and a lot of fun especially against friends. Formerly sold as shareware, the latest version was released into the public domain in 2001. 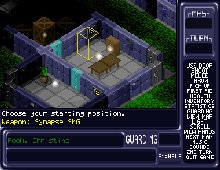