Panic Soldier is an interesting squad-level RTS from Trigger Software, a short-lived German developer. The game is reminiscent of Z and Strike Squad in its emphasis on individual soldiers, but unfortunately comes out less than equals to either game.

It is not that Panic Soldier is completely devoid of any originality or fun. In fact, the first few levels are quite interesting, especially because you get to use money you collect during the mission to buy -- err, recruit -- new soldiers of different types and ranks (which determine their skill level). But the game is missing the character of soldiers in Z, the deadpan humor of Cannon Fodder, the intelligence of Seven Kingdoms, and the captivating plot of Battle Realms. Without any of these strengths, Panic Soldier ends up being just another run-of-the-mill RTS that really does not warrant much attention. So, as Freud might have said, Panic Soldier is close - but it is no cigar (and probably in this case a cigar is even less than a cigar ;)). An above-average game that is worth a look, but will not hold your attention for long. 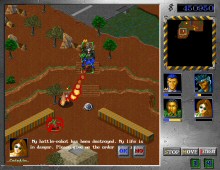