Oxford Games is a collection of three early games from Oxford Softworks: Bridge 2,000, Backgammon Royale, and Chess Player 2150. They are all solid releases compared to their peers at that time, and strong AI - the company's hallmark - is already evident in all three games. All three games also feature many options, particularly ones that have good 'tutorial' aspects. I especially like the 'educational' aspect of Bridge game - you can play all four hands yourself, or let the computer play but see its hands during the game. This is a very good way to learn Bridge, not to mention the fact that it is fun (well, for me anyway) to watch a close match played by computer players with very similar skill levels.

Chess Player 2150, my second most favorite game in this bunch, offers many options in addition to the standard human vs. computer chess game. You can choose to see various opening books, and solve chess puzzles (i.e. "find the best move in this situation"). Computer AI is strong, although it is not as clever as Sargon V in my opinion. Overall, this collection is highly recommended for every fan of abstract strategy games. Although Oxford Softworks would go on to produce much better titles through the years (up until their demise around 2002), their solid AI coding is already evident in these 1990 games. Recommended! 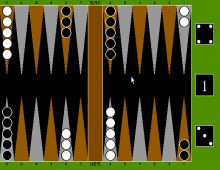